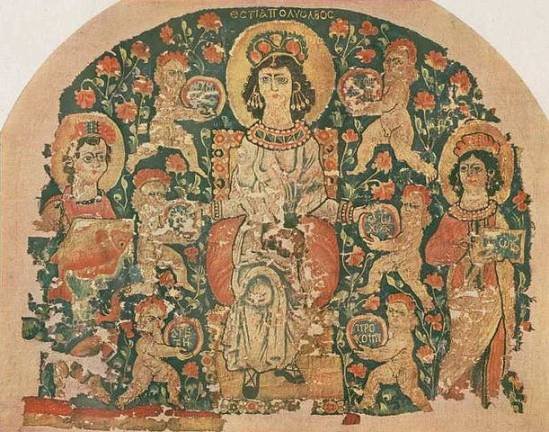 Hestia is the oldest daughter of Cronus and Rhea. Her sisters were Hera and Demeter and the three were called the “Great Goddesses of the first Olympian generation”. She was also the oldest sister to Zeus, Hades and Poseidon. Hestia has also been referred to as the youngest child of Cronus and Rhea and there is a unique story that surrounds this saying.

It was said that Cronus would have children that were so powerful that he would be overthrown by one of them. Since he did not want this fate to come to pass, he came up with a plan to prevent it from happening. As each child was born Cronus would swallow them whole. He felt they could not do him any harm if they were held inside his body.

Eventually, Rhea grew tired of all her children being swallowed by Cronus. When she was ready to give birth to her last son Zeus, she enlisted the help of Gaia, who was Cronus’s mother to help save him from Cronus and prevent him from being swallowed up. They tricked Cronus into swallowing a stone instead of Zeus.

They sent Zeus away to Crete where he was raised in a cave located on Mount Dicte. Here he was attended to by the divine goat named Amaltheia. Later when he grew into a young man he returned and rescued all of his brothers and sisters from the belly of Cronus. Since Hestia was the first that was swallowed she was the last to be removed, hence the saying evolved that she was both the oldest and the youngest child born to Cronus and Rhea.

Hestia was called the gentlest goddess out of all the Olympians and is known as the goddess of the hearth. Hestia, being a virgin goddess, swore by the head of her brother Zeus to always remain a virgin, even when she was enticed by Apollo and Poseidon.

Hestia tended to the sacred fire located in the hall of the dwelling of the chief god Zeus, which according to Greek mythology is located on Mount Olympus. Every hearth found on earth was considered her altar even though she actually had no throne of her own. She was one of the “Twelve Olympians” in the beginning, but when Dionysus made his appearance she gave her position up to him to avoid conflict and so she could care for the sacred fire on Mount Olympus. This action proved just how gentle Hestia really was.

There are not as many stories surrounding Hestia as it is for many of the other Olympian gods. This is believed to be due to the fact that she was such a gentle and passive goddess. However, further inspection of the life of Hestia indicates that she was a great religious force of incredible importance.

Hestia is portrayed as a woman who was dressed modestly and wore a head veil. There are few myths circulating about Hestia as she did not engage in adventures or do any roaming around the way many of the other gods and goddesses did.