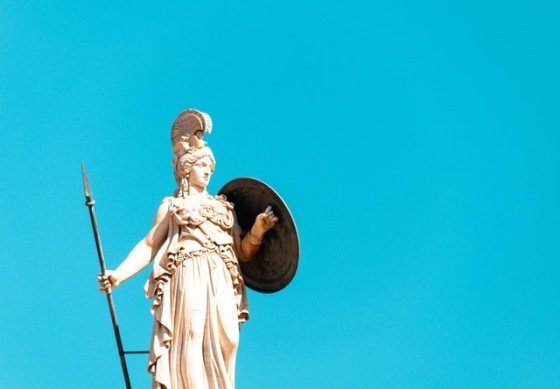 Most agree that she was Zeus’s firstborn child. This is why it is believed that only she shares the famous weapons associated directly to Zeus which were the thunderbolt and aegis. The aegis is a protective device that Athena wore upon her breastplate.

The Olympian version that tells of the birth of Athena is the most common one told. This version states that Zeus had relations with his first wife, Metis who was a goddess with cunning or sneaky thoughts. Zeus was afraid that if Metis had a child that it would grow up to be stronger and more cunning than he was. Zeus wanted to prevent this from happening so the story says that after being with Metis he swallowed her to prevent her from having a child.

However, the story says that he was too late because she was already pregnant with Athena and it is believed that she started making a robe and helmet for her daughter immediately after being swallowed. The pounding of the hammering put Zeus in so much pain he screamed with anguish. Some believed that Hephaestus cleaved the head of Zeus creating an opening and this is where Athena was born.

Other stories say it was Prometheus, Palaemon or Hermes that delivered this blow, so it depends on which source you use. Still, Athena is said to have sprung out of the head of Zeus and that she was full-grown and carrying weapons when she came out.

Poseidon was Athena’s uncle and both of them had an interest in one particular city found in Greece and both of them claimed it for themselves. To decide which one would have the city it was decided that they had to give a gift to the people of the city. The one with the finest gift could claim the city. Poseidon’s gift was a spring flowing from the side of a cliff that he created by striking the cliff with his trident. However, the water was salty like the seas and was of little use to the people.

Athena gave the people an olive tree which produced oil, food and wood. Therefore, her gift was considered better and she won the city that she named Athens. Sparta was another city that Athena supported and there were several others as well.

In the classical myth that was recorded about Athena, it is shown that she never had a lover. Therefore, she was known as “Athena Parthenos” which translated means “Athena the virgin”. Athena is believed to be the virgin mother of Erichthonius, which was brought about by the failed attempted rape of Hephaestus.

Another story says that when Athena eluded Hephaestus that some of his semen had fallen to the ground. From the earth was born the child Erichthonius and Athena became his foster mother. Athena had a companion named Nike. She was the goddess of victory and her attribute was the owl. Athena was often seen with an owl in her presence.

Athena was the patroness of arts, crafts, metalworking, and weaving. Athena appeared in Greek mythology as the goddess that was the counselor of many heroes. Her wisdom included cunning intelligence that was revealed often. She is portrayed in full armor with a helmet raised high as a gesture of peace with a spear in hand.