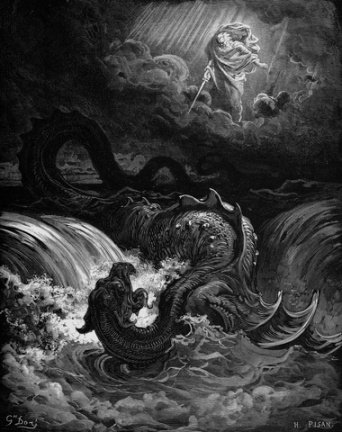 One of the very first Gods to emerge with the creation of the universe was Chaos which was the “nothingness” from which all things that exist first appeared. The children of Chaos were formed with Gaia who was the earth being the first to appear. It is said that Gaea gave birth to Heaven who was called Ouranos and this is where the Titans, who were the first Gods, were actually born. Tartaros was the underworld and Eros was the life-bringer or the bringer of sexual love.

Erebus was the darkness of the underworld and Nyx was the darkness of the night. Pontus also originated during this time and was known as the seas. All of these are said to be the children of Chaos which was the lower atmosphere that surrounded the earth with air. This air was invisible and also a gloomy mist combined. It was the gap or space located between the earth and heaven.

Chaos is sometimes referred to as the “original void of existence”. It was the shapeless entity that created the cosmos. The word Chaos is derived from the Greek word “Khaos” meaning “gaping void”. The ancient Greeks believed that Chaos was made up of four different elements which were the earth, air, fire and water. It was these four elements that were found in Chaos that made it possible for the cosmos to come into existence in the beginning of time.

There are three characteristics that best describe Chaos. The first is that it is the space that divides and separates the earth from the sky. The second is that Chaos is the bottomless gulf that never ends. Although this may seem like a contradiction when you consider the earth emerges from Chaos providing a stable ground. The third characteristic of Chaos is that it extends in all directions without end and this place had no feasible orientation.

It is believed that Chaos is the relationship that connects certain events that can produce astonishing results. In other words, any event that occurs in Chaos, no matter how small and insignificant it may be, can in turn be the trigger that sets off a chain of events that could change the whole solar system. Another name for this theory is the “butterfly effect”.

In essence, Chaos is the beginning of time simply because there has never been any other explanation of anything coming before it. In fact, it is never even mentioned how Chaos came to be. It is only stated that Chaos was formed from nothingness and that both Chaos and nothingness have been around forever. What this means is that the actual “existence” of Chaos has never been accounted for till this day and most likely it never will be.