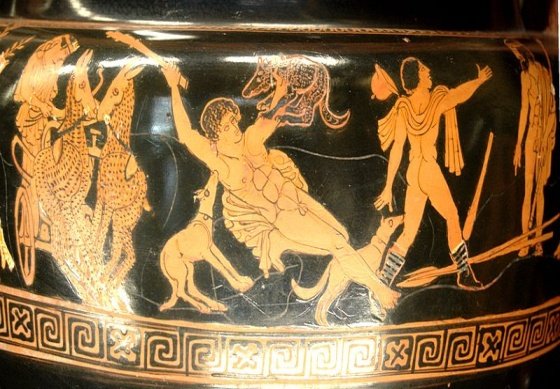 Artemis was the daughter of Zeus and Leto and the twin sister of Apollo. She was armed with a bow and arrows which were said to be made by Hephaestus and Cyclopes. Different legends have different accounts of the birth of Artemis, but the most common version says that she was born on the island of Ortygia the day before her brother Apollo was born on Delos. Shortly after Artemis was born she is said to have helped Leto cross over the waterways to reach Delos, then she aided her mother in the birth of her twin brother Apollo.

Artemis is called the goddess of the wildness because her most important job was to journey around the land that was uncultivated such as forests and mountains where she hunted certain animals. These animals included the panthers, stags, hinds, and lions. Although, it is later said that she actually helped to protect these animals and made sure they were kept safe and could reproduce.

Artemis was also referred to as the goddess of the hunt, wild animals, and fertility and she was one of the Olympians. It was mainly in the cities that she was referred to as the goddess of childbirth and fertility. It is believed that her role in the delivery of her brother is what started her role as a supporter of women in labor and a guardian of children when they were young.

However, Artemis was also known as the goddess of contradictions. Therefore, many versions surrounding Artemis say that even though she was the protector of women in labor, her arrows would bring the women sudden death during giving birth.

Artemis was a virgin goddess and was extremely defensive when it came to her purity. Legends say that she even asked Zeus to give her “eternal virginity”. All of the companions of Artemis were virgins as well and she was also very protective over them.

Any man that tried to dishonor Artemis paid the high price of death. Orion was a giant and considered a great hunter that attempted to rape Artemis. She killed him for this attempt. Actaeon accidentally saw Artemis along with her nymphs bathing naked, legend says she turned him into a stag and sent his own hounds out to kill him.

She was even enraged at one of her nymphs named Callisto for allowing Zeus to seduce her. After Callisto gave birth to Arcas, Artemis turned her into a bear and then killed her with an arrow.

Artemis was just as possessive over her scared animals and anyone that harmed them also felt her wrath. In fact, anyone crossing the goddess paid dearly as the mortal Niobe learned when she claimed to be superior to Leto because she had given birth to more children. With her brother’s assistance, they hunted down all of Niobe’s children and killed them. Artemis killed all the girls and Apollo killed all the men.

In pictures, Artemis is often portrayed with a crescent moon over her forehead and was often compared with the goddess of the moon called Selene. Artemis was a divinity of healing. The same was true for her brother Apollo. Still, it is said that she brought about certain diseases and spread them. These included rabies, gout, and leprosy.