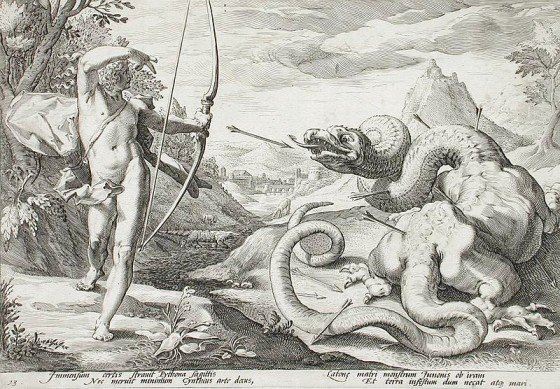 Apollo was best known as the god of archery because of his bow and arrows and music because of the lyre he played. However, he was also known as the god of medicine, poetry, dance, prophecy, intellectual inquiry, and for taking care of herds and flocks. Apollo was considered to be an oracle god and some referred to him as the god of light, the god of plague, the destroyer of rats and locusts and as the god of religious healing in which he gave a ritual purification for anyone guilty of immoral deeds.

Apollo’s father was Zeus the king of gods and his mother was Leto, who was the daughter of the Titans known as Coeus and Phoebe. Hera, who was the wife of Zeus, was outraged when she discovered Leto was pregnant by Zeus. She forced Leto to roam the earth searching for a place where she could give birth, but forbid her to stay on land or islands. Considering that this basically eliminated her options, the only place Leto found to stay was Delos, which was a floating island.

This is where Apollo was born. It is said that a flock of swans circled the island just as Apollo was being born, which explains why swans were so sacred to Apollo. Another version of the birth of Apollo says that Hera kidnapped the goddess of childbirth named Ilithyia to prevent Leto from being able to give birth, but the other gods tricked her into releasing Ilithyia with an amber necklace. All versions seem to agree that Artemis was born first on the island of Ortygia and in some way assisted with the birth of her twin brother after helping her mother to Delos.

Apollo followed in his fathers footsteps in many ways. For one he had many different affairs with both goddesses and with mortal women. He had a huge infatuation with a nymph named Daphne who was the daughter of the river god Ladon. She fled to the mountains to elude Apollo but he followed her, so she asked Peneus for help. He did so by causing Daphne to transform into a laurel tree when Apollo tried to embrace her, which is why this became his sacred tree.

He also fell in love with another nymph named Cyrene. She bore him a son named Aristaeus who was a protector of fruit trees and cattle. He taught mortals how to use traps and nets for hunting and many dairy skills. Other children born to Apollo are Troilius, Asclepius and Ion.

Another thing that Apollo had in common with his father Zeus was falling in love with another male. Apollo fell in love with a Spartan prince named Hyacinthus. Unfortunately, Zephyrus who was known as the “god of the west wind” was jealous and caused the wind to blow a discus that Apollo threw off course. It hit Hyacinthus in the head killing him. He also had feelings for a young boy named Cyparissus who was a descendant of Heracles.

Apollo was also known for being a ruthless god whenever he was made angry. Marsyas challenged him to a music contest and when it was over, Apollo had him flayed while still alive for challenging a god. He also killed all the sons of a mortal named Niobe for bragging that she was superior to his mother Leto because she had bore more children. Artemis killed all of her daughters.

Apollo is most often pictured as a clean-shaven young man with a laurel crown that carries a bow and arrows or a cithara which is a musical instrument that resembles a lyre. He was considered to be quite handsome and did not use archery for hunting or to engage in war. Apollo’s most well-known characteristic is his prophetic powers that are symbolized by the tripod.