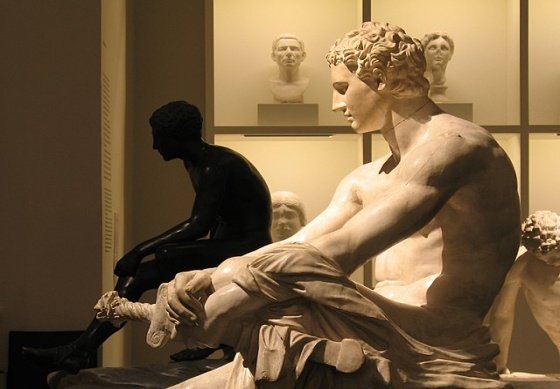 Ares was considered the Greek god of war and battle. He was often also considered the instigator or violence. He was son to Zeus and Hera and even his own father hated him because of his war-like nature. All of the Olympian gods despised Ares and his violent ways. He was bloody and merciless but also considered cowardly and with no moral attributes.

Ares was big and loud and was faster than all the other gods. One weakness of this god of war was the seduction of Aphrodite who became his consort. One story says that Ares was caught in the act with Aphrodite by her husband Hephaestus who fashioned a magical net to hold the lovers as they were, naked and present them before the gods to account for their actions.

Ares in the Battlefield

Ares had Phobos (Fear) and Deimos (Terror) with him on the battlefield and many tales say that these were his sons. He also had the goddesses Eris (Strife) and Enyo (Horror). He was also the father of the goddess of harmony, Harmonia and the Amazons, Penthesilea and Hippolyte. Some stories say that he blessed his Amazonian daughters with a “manly spirit” which added to their strength and power.

Ares was popularly worshipped in Hellas but there were only a few temples there dedicated to him. It is believed that his following originated in Thrace. His name is often believed to mean destroyer or avenger. Romans often called him the god of Mars but their war-god was of more significance to them than Ares was.

Ares had many children, some of which were briefly mentioned above. His divine children include Phobos, the god of fear; Deimos, the god of terror; Harmonia, goddess of harmony; and Drakon of Thebes, a dragon that guarded the spring of Ismene at Thebes. Stories say that armed warriors would spring from the dragon’s teeth when they were sown in the ground.

Ares also had hero children such as Meleagros, the Prince of Aitolia and the hero that led the Hunt for the Kalydonian Boar; Kyknos, the warrior who challenged Hercales and was slain; Diomedes, the Kind of the Bistones of Thrake; Hippolyte, the Queen of the Amazones; and Penthesileia, also Queen of the Amazones who came to help Troy in the Trojan War.

There are many great tales of Ares and his reign. Some legends say that Ares slew the giant, Ekhidnades who was a monstrous enemy to the Olympian gods. Another says that he assisted the Trojan armies in their war with the Greeks and that he was wounded in battle after an encounter with the hero Diomedes and the goddess Athena. Tales also say that Ares was imprisoned in a brazen jar by the Aloadai giants as they tried to conquer heaven.