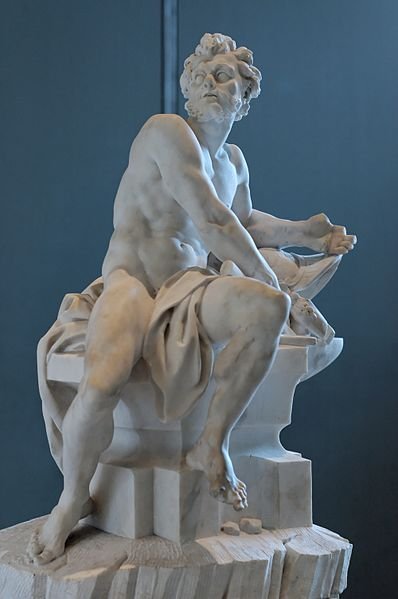 Hephaestus – The God of Fire

Hephaestus was the god of fire, particularly the blacksmith’s fire. He was the patron of craftsman, more skilled with his hands than any other god and mortals alike. He was famously worshipped in Athens but appeared in some other centers as well. Hephaestus was known as the god of volcanoes and was associated with Mount Etna on the island of Sicily.

Hephaestus was known as the lame god because he was crippled and weak from birth. There are two versions of the story of his birth to his parents, Hera and Zeus. One version says that Zeus became angry with him after he sided with his mother in a fight so he threw him from Mount Olympus where he fell for nine days and nine nights and finally landed on Lemnos Island where he built his palace and made his home under a volcano.

Another version of the tale says that it was Hera who threw Hephaestus from Mount Olympus after she was displeased by the sight of him. This story says he fell for a whole day and landed in the sea where he was rescued by nymphs who took him to Lemnos to be cared for.

The Story of Hephaestus

The story of Hephaestus is an interesting one. He is often depicted as an ugly god, this coupled with his being lame were not good points for Hephaestus. However, he devised a plan against those that rebuked him. He wanted revenge for his rejection by his mother Hera so he created a magic throne that was given to her on Mount Olympus and when she sat on it, she became trapped like a prisoner.

All of the gods of Mount Olympus begged for Hephaestus to come and remove Hera from the throne but he refused. One day, this famous and stubborn smith god was tricked by Dionysus who have him wine until he was intoxicated and then carried him back to Mount Olympus on a mule. Many people are familiar with this scene being depicted in popular Greek art.

Hephaestus was given Aphrodite, the god of love, as his wife when we released Hera. Some tales also say this was a punishment to Aphrodite who was not pleased with Hephaestus as her husband. Dionysus was also rewarded for the role they played in the release of Hera and was made one of the Olympian Pantheon.

The Birth of Hephaestus

It is interesting to note the circumstances surrounding the birth of Hephaestus. He was known as the son of Hera and Zeus but Zeus actually had nothing to do with his birth. Stories say that Hephaestus was parthenogenetic which means he was born to Hera without fertilization from a male. Some versions of the story say that Hera did this out of anger that Zeus cheated with Metis and had a child, Athena, from this affair.

Hephaestus was told to create many fabulous and elegant creations and jewels for his wife Aphrodite, none of which helped keep her from straying from the marriage. He made her a golden, magical girdle but this only made her more irresistible to both mortals and gods alike. Once, he caught her in bed with one of many lovers, Ares, the war god and he entrapped them in a special magical net. He took them in this net, as they were naked and exhibited them before the gods hoping for retribution for Aphrodite’s cheating ways but all he got was laughed at.