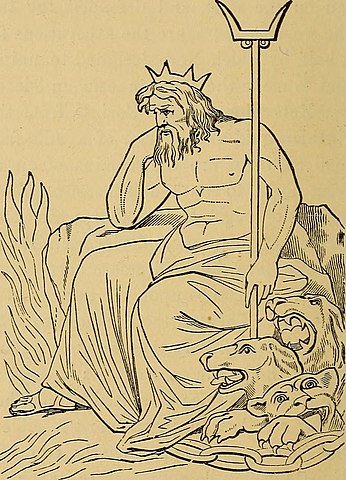 There are many Greek Gods in ancient Greek Mythology. From the main Gods to the minor ones, each had a name, a role and a specific story and history surrounding them. This makes the story of each God unique and important. Erebus was the son of Chaos, the void from which all things are said to have developed, also known as Darkness. Erebus is often used metaphorically and referred to as Hades itself.

While being known as the god of darkness or Hades, there is little else that is really known or said about Erebus. Below is a run-down of some of the most well-known facts and history of this particular mythological god.

A God of Darkness

Erebus is known as primordial darkness and was born to Chaos and Nyx (Night). He was the father of Aether (the upper atmosphere) and Hemera (Day). Some stories also say that Charon is the son of Erebus and Nyx. Charon is the ferryman that takes the dead over the rivers of the infernal region. Erebus was called the personification of darkness and shadow.

Some legends describe Erebus as the Infernal Region below the earth. This is also where the stories of Erebus being synonymous with Hades come in. The stories say that Hades was split into two regions. It is believed that he was part of Hades. Erebus was the top region where the dead have to pass through shortly after they have died. Tartarus is the deepest region which is where the Titans were imprisoned.

Erebus Was Believed to Be Hades

Erebus is often used as a synonym itself for Hades and he is most commonly associated with these tales of darkness and hell. Erebus is sometimes also called Erebos. His father Chaos, was an asexual God and produced Erebus and his sister Nyx alone. Nyx then was Erebus’ consort and they had children themselves.

Where Did the Name Come From?

Many mythological gods have names that are not easily traced back to their source. Sometimes it is difficult to tell exactly where the name may have come from as there may be different possible meanings and origins for it. The name Erebus is believed to come from Proto-Indo-European language, *h1regwos, cognate to Old Norse rœkkr, Gothic riqis “darkness”, Sanskrit rajani “night”, Tocharian orkäm “darkness”. Some also believe that Erebus could be from Semitic, c.f. Hebrew erebh and Akkadian erebu “sunset, evening” (“darkness”).

Little more is really said or known about this particular god in Greek mythology. Most tales and myths say the same things mentioned above but little about anything else he may have done or achieved in his time.