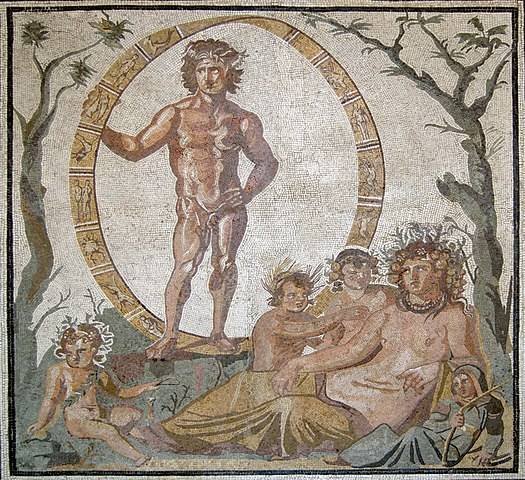 Uranus is known as the primeval God of the sky because he represented the sky and all the heavens. He was also known as Ouranos and was believed to be the very first son of Gaia, who is known as the earth. Greek mythology states that Gaia created Uranus as her son without help from any other deity. Uranus then covered the earth with a huge dome and became the ruler of all. It is also believed in Greek mythology that Uranus eventually took Gaia as his wife and became her husband.

An early Greek poet named Hesiod states that Uranus and Gaia had twelve Titan children with six of them being female and six male. It is also believed they had other children that included three one-eyed giants known as the Cyclopes and the Erinyes, known as the furies who avenged the wrongs that were done to families. They also had three monsters that had fifty heads and one hundred hands each. They were known as the Hecatoncheires.

Uranus was castrated by his son Cronus and his sex organs were thrown into the sea by the request of Gaia. She asked her son to do this deed for her because Uranus was either so horrified or so frightened by his offspring that he hid the Hecatoncheires and the Cyclopes deep in the bowels of the earth in a place called Tartarus. This caused Gaia intense pain and when she could bear it no more, she enlisted the help of her youngest son to put an end to her pain by castrating Uranus. This would also put a stop to her fertility and prevent her from having any more offspring that could end up being viewed as monsters.

Gaia designed an adamantine sickle and gave it to Cronus to help him perform this deed. When Uranus came down to embrace Gaia, Cronus sprang up and castrated his father with the sickle. Giants and nymphs were born of Gaia and Uranus when his blood fell down to the earth after the castration. It is also said that when his genitals were thrown into the sea by Cronus that whitish foam appeared and the goddess of love and desire known as Aphrodite was born out of the middle of this foam.

There is another version of the story that says Uranus would cover Gaia with his vastness and take advantage of the fruitfulness of the earth. Gaia grew tired of this and asked her children to free her from this overpowering and excessive embrace. Cronus was the only one that would come to his mother’s aid and do this deed for her. When the blood of Uranus fell to the earth Erinyes, nymphs, giants and the Cyclopes were born. The home of the Phaeacians, which was an island called Corfu sprang up from the sea when Cronus threw the sickle he used to castrate his father into it.

After this deed was accomplished Uranus took his leave and separated himself from Gaia never to return again. This allowed Cronus to become the king of the Gods and rule over the earth and sky for many years.