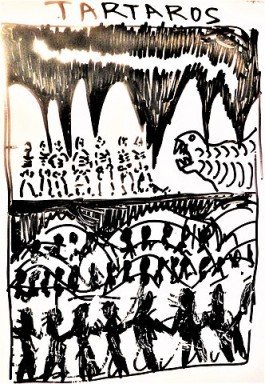 Greek mythology speaks of a deity called Tartarus which is considered to be a place of pain and torment. It is not clear exactly where or what Tartarus is other than the fact that it is similar to a dungeon that is used strictly for torture. It is described as a deep, dark gloomy abyss that is located within the depth of Hades or as the underworld itself with the most hellish section referred to as Tartarus. To help you understand how far below Hades Tartarus is located, Zeus described it as being “as far beneath Hades as heaven is high above the earth”.

Tartarus is an ancient entity just like the earth and time itself. Even though it is a place that is located deep into the underworld beneath Hades it is still a deity. Chaos is the shapeless entity that was responsible for creating the cosmos and Tartarus was the third force that was manifested in the void of Chaos. Some ancient orphic sources state that Tartarus is the “unbounded first-existing thing from which the Light and the cosmos were born”.

Tartarus is engulfed by three layers of darkness or night because it is located so far away from the light of the sun. It is known as a very damp and horrible place engulfed by pain and gloom. Even though Hades is known as the place where the dead reside, Tartarus is also said to be occupied. It was the prison of the Cyclopes and Hecatonchires that were the children of Uranus and Gaia. Some versions state that Uranus imprisoned them there while others say it was Cronus. During the battle between the Gods of Olympus and the Titans, Zeus released the Cyclopes and Hecatonchires to help him win the war.

When the Gods of Olympus beat the Titans in this battle they cast many of the Titans into the abyss of Tartarus and the Hecatonchires stood as guards. In the beginning, the only souls that were confined to the depths of Tartarus were the ones that threatened the Gods of Olympus. However, this changed over time and it eventually became a place where souls were sent when they were deemed to commit serious, unforgivable crimes against the Gods such as betrayal.

Here are a couple of examples of the types of torment these souls endured in Tartarus. Ixion was a mortal that lusted after Hera, the wife of Zeus when he was invited to dine with the Gods. When his willpower and tolerance were tested by Zeus and he failed the test Ixion was banished to Tartarus, strapped to a wheel engulfed in flames and left to suffer forever. Sisyphus was forced to continuously roll a boulder up a mountainside only to have it roll back down again for betraying Zeus.

The judges who were responsible for making the decision of who goes to Tartarus are said to be Minos, Rhadamanthus and Abacus according to Plato. One way to describe Tartarus is to say that it is the abyss of the underworld where the most horrific sinners were sent to be punished for their transgression through eternal torment they could never escape.