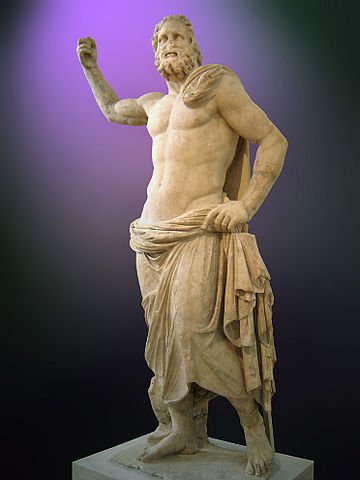 Poseidon was known as the god of many names but most famously as the god of the sea. He was the son of Rhea and Cronus and was one of six siblings. These siblings including Poseidon were said to “divide the powers of the world”. They were Hestia, Demeter, Hera, Hades and Zeus. Each was swallowed whole by their father, Cronus when he was born except for Zeus, who was hidden from Cronus until he grew up and killed his father, avenging the siblings and allowing them to come out and share the powers.

Poseidon became ruler of the sea and Zeus ruled the air and sky while Hades ruled the dead or the underworld. Poseidon was also called the god of earthquakes and the god of horses. Some symbols that have been associated with him include the dolphin, trident and three-prong fishing spears.

Stories say that Poseidon used his powers of water, earthquakes and horses to intimidate and inflict fear and punishment on people as revenge. Poseidon was considered a moody divinity with a bad temper that often resulted in violence. During good moods, he would do great things and create new lands in the water but in a bad mood, he would strike the ground with his trident and cause earthquakes, violent sea storms, shipwrecks and drownings.

Sailors and other voyagers of the sea relied on Poseidon and looked to him to have mercy on them and give them safe waters during their travels. It was told that some men drowned or drowned their horses in his honor. The stories say that Poseidon lived on the ocean floor in his palace made from coral and gems. It was also told that he rode in a chariot that was pulled by horses.

Poseidon was known for having many love affairs and fathering many children. Some included Triton who was half-human and half-fish. Triton was from his marriage to a Nereid named Amphitrite. He also had Chrysaor and Pegasus, the flying horse, with a Gorgon, Medusa. Poseidon often exerted force and control over women and his rape of Aethra resulted in the birth of Theseus. After raping Caeneus, he turned her into a man, at her request. Poseidon also raped Amymone when he rescued her from an escape from a satyr. Other children of Poseidon include Orion, King Amycus, Proteus, Agenor, Belus from Europa, Pelias, the King of Egypt, Busiris and Eumolpus.

Of all of Poseidon’s love affairs, one of the most notorious was with Demeter, his sister. When he pursued her, she turned herself into a mare to avoid him but he found her anyway and turned himself into a stallion to capture her. It is told that this union resulted in a child, a horse named Arion. There are also stories of how Poseidon fought with Athena, the goddess of war over the city of Athens. Athena won this competition which angered Poseidon and he flooded the Attic Plain. In the end, the two compromised and worked together to make the most of their powers.