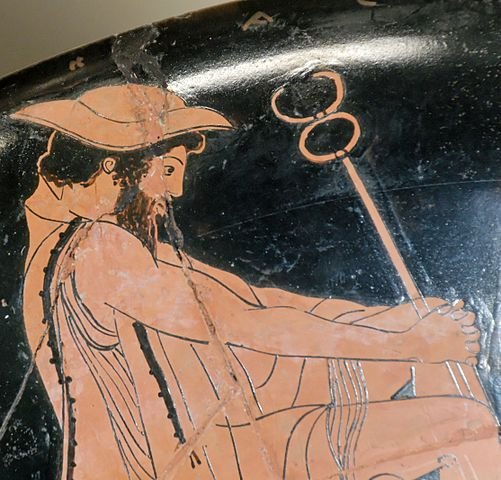 Hermes was considered the herald of the Olympian gods and he was also the messenger of the gods. He was the son of Zeus and the nymph Maia, daughter of Atlas and one of the Pleiades. Hermes was also known as the god of shepherds, merchants, land travel, weights and measures, literature, athletics, and more. He was known for his shrewdness and cunning nature. He was also a minor patron of poetry. He was predominately worshipped in Arcadia but also all throughout Greece and his festivals were referred to as Hermoea.

The Birth of Hermes

According to the tales, Hermes was born in a cave at Mount Cyllene which is in Arcandia. He was conceived when Zeus went to Maia in the middle of the night while all the other gods were sleeping. Hermes was born by dawn and she wrapped him in swaddling bands and went to rest herself. Legend says that Hermes got free and ran away to Thessaly where his brother Apollo grazed cattle. He stole some of these cattle and drove them back to Greece.

It was during this event while he was trying to hide the cattle that he took the intestines from one of the stolen cattle and a shell from a tortoise that he killed and created the first lyre. He later snuck back into the cave and into the swaddled clothing as if he had never left. Apollo, after noticing he was robbed, came to Maia and claimed that it was Hermes who had done it. Hermes denied this but the all-seeing Zeus knew the truth.

At this time, Hermes began playing the lyre and Apollo was so entranced with the musical instrument that he offered a deal; Hermes could keep the cattle in exchange for the lyre. Later, while watching over his newfound cattle, Hermes also created the pan-pipes.

Since he is the messenger of the gods, Hermes has the duty of guiding the souls of the dead to the underworld. The underworld is often called the psychopomp. He was also known for bringing dreams to the mortals. In most drawings of Hermes he has a wide-brimmed hat or a winged gat and he usually has winged sandals and the herald’s staff. He was often dressed as a shepherd.

Other symbols of Hermes include the tortoise, the cock and the pouch. Hermes is often called a phallic god and was associated with fertility as well as good fortune. He was a patron of roads and boundaries as well.

Hermes was said to have several offspring. Some of his children were believed to be Pan, Abderus and Hermaphroditus. Like many other gods, Hermes had many affairs with mortals, goddesses and also with nymphs. From these sexual rendezvous often came children. Pan was a half-man, half-goat and was believed to be from Dryope, the daughter of King Dryops. Abderus was a companion to the hero, Heracles and Hermaphroditus, also called Aphroditus was believed to be the child of Hermes and Aphrodite. He had the characteristics of both male and female sexes.

On another interesting note, the Greek post office has Hermes as its symbol.