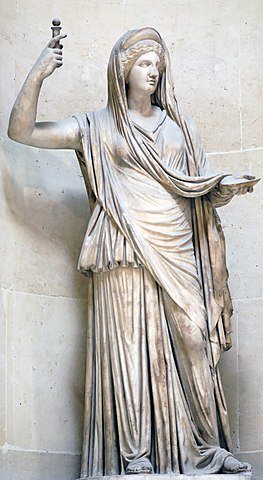 Hera was considered the queen of the Olympian deities. She was the daughter of Cronus and Rhea and was both the wife and sister of Zeus. Originally, she was swallowed by her father after her birth but was later set free when her brother Zeus defeated their father. Stories say that each year Hera can regain her virginity by bathing in a well at Canathus.

Hera and Zeus had children together, the smith-god Hephaestus and the goddess of youth, Hebe. They also birthed Ares, the god of war. In some stories, however, these children were not born to Zeus but instead were conceived by her slapping her hand or eating lettuce. This is to represent that her children were born from lust and hatred.

It was well known that Hera was jealous of her husband Zeus and his many affairs. She punished both her rivals and their children and let her fury soar onto those that angered her. She released her fury on both mortals and goddesses alike. Not even Zeus could stop her in her vengeance and wrath. Sometimes when she would get angry, he would tie her to the mountain of Olympus by placing anvils on her feet but mostly he simply tried to hide his affairs and his illegitimate children. Some he even turned into animals to try to keep Hera from ever knowing the truth.

The Wrath of Hera

When displeased and angered by her husband’s affairs, Hera placed two serpents in the cradle of Heracles, she had a hundred-eyed giant watch over Io and she tried to prevent the birth of Apollo and Artemis. She made the foster parents of Dionysus go crazy.

However, Hera was still worshipped by many. Her main sanctuary was in Argos at the Peloponnesus, where she was considered the town goddess. The public festivals to celebrate Hera were called Heraia. Other temples dedicated to Hera were found in Olympia, Mycene, Sparta, Paestum, Corinth, Tiryns, Perachora, and on the islands of Samos and Delos.

Hera’s Roman counterpart is Juno. Her symbols include the peacock (the symbol of pride) and the cow. Hera was sometimes known as Bopis, which means “cow-eyed” and it is written that she had big eyes. The pomegranate, or symbol of marriage, is often depicted with Hera as well as the crow. Other attributes to her include a diadem and a veil. She was often portrayed as a solemn and majestic woman.