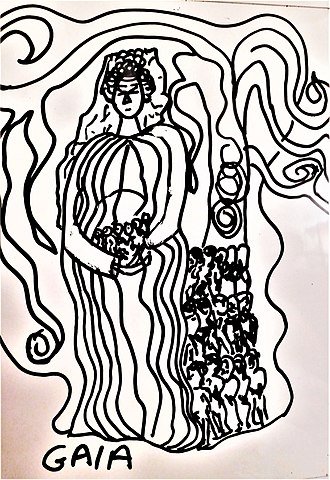 The Greek goddess Gaia was the goddess of the land or earth. Her name, (pronounced /’geɪ.ə/ or /’gaɪ.ə/) means land or earth. She was considered a primordial deity in the Ancient Greek pantheon. She is also often called a Great Goddess or Mother Goddess. Gaia’s equivalent in the Roman pantheon is Terra. Gaia is most famous for the many children she produced.

Gaia was a daughter of Chaos and she was the everlasting foundation of the gods of Olympus. Gaia had several children of her own self, without male fertilization. This is called parthenogenesis. She bore Uranus and Pontus. After this, it is said that she lay with Uranus and they had Oceanus, Coeus and Crius and the Titans Hyperion and Iapetus, Theia and Rhea, Themis, Mnemosyne, and Phoebe of the golden crown, and Tethys.

Gaia Has Chronos Who Will Overthrow Uranus

After each of these children, Gaia had Chronos, who would prove to be the worst of all the children. He greatly envied his father Uranus and would later castrate him and overthrow him for power.

It is said by Hesiod that Gaia had more children with Uranus after Chronos. She had the giant one-eyed Cyclopes: Brontes, Steropes and Arges. Then it says she had three hundred-handed sons of Earth and Heaven, Hecatonchires: Cottus, Briareos and Gyges, each with fifty heads.

Uranus hid these children (the Hecatonchires and the Cyclopes) in Tartarus so they could never see the light. This upset Gaia as well as caused her pain so she sought revenge for this evil deed. She created a great sickle of adamantine and requested the help of her sons, Chronos and his brothers. Chronos was the only one brave enough (or perhaps motivated also by his own selfish reasons) to help his mother Gaia.

They devised a plan in which Gaia would call Uranus to her for the purpose of intercourse and Chronos who had been lying in wait, ambushed his father and castrated him. From this castration, Uranus would sire still more children that are sometimes credited to Gaia as well and after the castration, she gave birth to Echidna and Typhon by Tartarus. Still, later she had Nereus, Thaumas, Phorcys, Ceto and Eurybia, the sea deities from Pontus.

Gaia was known for some things other than just her many children, however. She was known for making Aristaeus immortal. She is also believed by many to be the original deity of the Oracle at Delphi. It is said that she passed her powers on to Poseidon, Apollo, or Themis (it varies according to who tells the story).

It is also known that in ancient Greece, when oaths were sworn in the name of Gaia, they were considered to be the most binding of oaths. Many depictions of Gaia show her as half woman, half emerging from the earth and many others show her with many children or infants as she was a Mother Goddess and so well known for her many offspring.