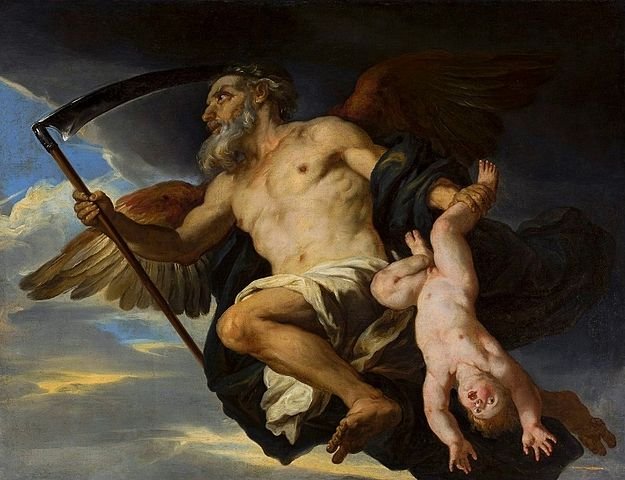 The Greek God Chronos, is sometimes also known as Kronos or Chronus. He was not, however, connected with Cronos. The male deity from Ancient Greece was depicted with a long grey beard and wrinkly skin and is known as the God of Time. Chronos was the leader of the first generation of Titans and was also the youngest. These Titans were divine descendants of Gaia, the Earth and Uranus, the sky. As the stories go, Chronos overthrew his father Uranus and ruled during the Golden Age. Later he was overthrown by his own son and was held prisoner in Tartarus or sent to rule the paradise of the Elysian Fields.

In ancient Greek mythology, Chronos was said to envy his father, Uranus and his position as ruler of the universe. This is why he overthrew him so he could have the power and control. It is said that he castrated his father Uranus and deposed him to take his place as ruler. In Athens, on the 12th day of each month, there was a festival called Kronia which was held in honor of Chronos and to celebrate the harvest.

Chronos is often called a harvest deity because of his association with the Golden Age. This was a bountiful and virtuous time and Chronos oversaw the crops and the agriculture of the land and the time. This is why many pictures or paintings of Chronos show him with a sickle. This same sickle is the weapon that was said to be used to castrate Uranus.

Where Did His Name Come From?

Chronos was also recognized in classical antiquity with the Roman deity, Saturn. The exact origins of the name are not certain. Many believe that it is related to the word “horned” which suggests that he is connected with the ancient Indian demon known as Kroni or to El, a Levantine deity.

The Overthrowing of Uranus

According to Greek mythology, Chronos was very envious of his father’s power. The myth says that Uranus hid the gigantic youngest children of Gaia, Chronus’ mother, so they could not see the light. The hundred-armed Hecatonchires and the one-eyed Cyclopes were angry at being hidden away and Gaia created a great sickle and gathered the brothers all together to devise a plan to kill Uranus. Chronos was the only brother willing to do it and so Gaia gave him the sickle and helped him. He waited in ambush and Gaia called to Uranus to meet her. Once they met, Chronus jumped out and attacked his father, cutting off his genitals with the sickle and castrating him.

The castrated member fell into the sea and as many stories go, the blood which fell from Uranus (or sometimes the stories say the semen) fell to the earth and created Erinyes and Meliae (the Gigantes) and the member in the sea later produced Aphrodite. Uranus of course was angered and threatened vengeance on his sons for their deeds, especially Chronos.

After Uranus was overthrown, Chronos took Rhea as his queen and the two ruled the world. He re-imprisoned his brothers, Hecatonchires and Gigantes and also the Cyclopes and put a dragon, Campe to guard them. During the time that Chronos ruled, there was no need for rules and laws and the people lived in harmony. They did what they were supposed to and there was no immorality. It was a wonderful age.

The Prophecy of His Own Son

Chronos was told by his mother and father of the prophecy that he would one day be overthrown by his own son the way he had done to his father. Because of this, when he and Rhea sired many god-children, he swallowed them all as they were born in an attempt to prevent the prophecy from being fulfilled. Chronos swallowed his children, Demeter, Hera, Hades, Hetia and Poseidon. This upset Rhea and when the sixth child, Zeus was to be born, she and Gaia devised a plan to seek retribution on Chronos and save the children. When Zeus was born, they gave Chronos a rock instead which he swallowed thinking it was the child. Later Zeus would overthrow his own father, Chronos and force him to regurgitate the children he had swallowed, starting with the rock.