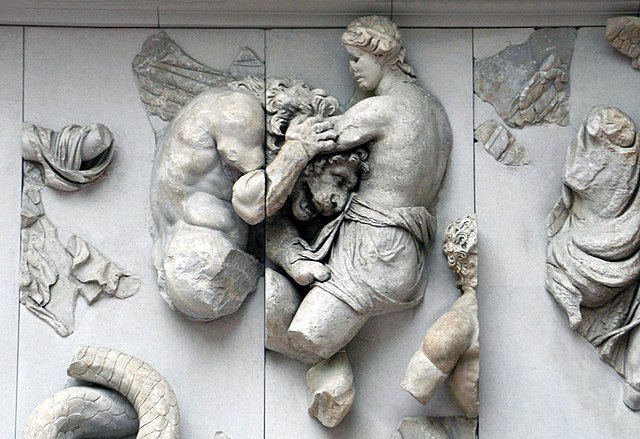 Greek mythology portrays Aether as one of the first-born gods of the elements. He is one of the Protogenoi Gods, meaning that he was one of the first to come into existence. Aether represents and actually is the “upper sky” which makes up all of the heavens and the unlimited space surrounding the heavens. It is said that Aether is pure air that is fit for the Gods to breathe unlike the air that is found near the earth which is considered to be gloomy by the Gods and unfit for them. He protects this air and prevents it from becoming polluted in any way. It is so pure that it would help to refresh and stimulate the Gods.

Hesiod’s Theogony states that his brother was Hemera and that they were the offspring of Erebus (the darkness of the underworld) and Nyx (the darkness of the night). Aether was called the “soul of world” because it is believed that all life as we know it originated from him. The name Aether means “upper air” “light” or “clear sky” which is a little ironic considering he is the offspring of Erebus and Nyx.

Aether is said to be illuminated with the heavenly light that is so bright that traces of it can filter down to the earth when the skies are clear. He floats high up above AER which is the God of the air in the lower atmosphere. It is said that during the night Nyx will pull the curtains of gloom tightly around the earth to allow the darkness of Erebus to move up and across the earth. Then in the morning when the darkness begins to fade, Aether’s sister Hemera will carry the gloomy mist away on a soothing breeze so the glow of all his beauty and radiance can be seen by the earth again.

It is believed that Aether severed as a defensive wall for Zeus in his battle to take over the cosmos from the Titians and that it blocked Tartarus from entering the cosmos during this time. This could have been a factor that helped this new generation of Gods beat the Titans and take control of the universe. Aether is referred to as the air that surrounds the clouds, mountain peaks, sun, moon and stars. He has a female companion named Aithre who is the Titanis of the “Clear Blue Sky”. She is also the mother of both the sun and the moon. It is believed that the stars were created by the intense fires of Aether.

An interesting fact to consider is that in the year 1887 a very famous experiment was performed by Michelson and Morley. This experiment was an attempt to find some trace of Aether on the earth. However, this experiment was a failure and no Aether could be found but it did contribute to Einstein’s “Theory of Relativity”. One thing is for sure, Aether certainly plays a very important role in the history of Greek mythology by being classified as the Soul of the World.